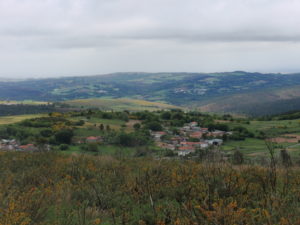 In Europe, there are as many "Ways" to Santiago as there are homes, because locals often begin their pilgrimage to Santiago by walking out their front doors. For the rest of us, we tend to choose a Way because of the time we have, the landscape, or the difficulty of the journey.

Like many planning to walk a camino, I started my plan with the France Way. Made popular in movies and books, UNESCO declared it a World Heritage Site, and it is the most popular. But, I wanted an experience closer to what the France way used to be like: fewer people walking, no rush to begin each day, and yet, still, plenty of accommodations. That's why I choose to walk the Via de La Plata and the Sanabres Ways.

Everyone has a Way or Camino that suits their desires and here are brief descriptions of the six most popular Ways to Santiago so you can begin exploring your own journey.

A lesser known Way is the English Way or Camino Ingles. At just 110km (~68 miles) it is the shortest complete Camino that will allow you to qualify for a compestela. (Pilgrims on foot must travel at least 100km). According to American Pilgrims on the Camino, this way accommodated English pilgrims who arrived in Galicia by sea. It's a short direct route that is best traveled March through October. There aren't many pilgrim accommodations, compared to the other routes, but there are many moderately priced hotels. Expect to spend 4-5 days walking this Way.

At 240km, The Portuguese Way (Camino Portugués) trails the Atlantic coast of northern Portugal and Galicia in Spain. This is a hilly route because of the streams and rivers emptying into the Atlantic. With heavy rains most of the year, September is a recommended month to traverse this Way. There are plenty of lodging options and the route is well way-marked. Expect to spend 12-14 days walking this Way.

American Pilgrims on the Camino suggest that this is a difficult route because it passes over the western end of the Cordillera Cantábrica with a number of ascents and descents of 6 to 8%. The Camino Primitivo is 285 km. It begins at Oviedo and at Melide joins the France Way. Only attempt the Primitivo in the summer months and be prepared for extreme weather. Expect to spend 12-16 days walking this Way.

By far the most popular is the France Way (Camino Francés). Made famous in books and movies, the France Way was declared a World Heritage Site by UNESCO in 20XX. The France's 774km (~481 miles) are extremely well marked with painted yellow arrows, plaques, and signposts. It's so popular that you'll barely need the markings because it is a constant flow of pilgrims. Even with snow in the winter and extreme heat in the summer, this Way can be traveled any time of the year and there are excellent accommodations. Expect to spend at least 30-35 days walking this Way.

Like the Portuguese, The Northern Route is a coastal, hilly Way. You'll begin in Irun and follow 825km or about 512 miles of hilly, coastal paths and roads along the extreme northern coast. This Way was popular during when the ancient Muslim occupation of Spain created a threat to the France Way. Expect impressive sea views, extreme heat in summer, and wet conditions much of the rest of the year. The Northern Way is probably best walked late May through early October. Accommodations near the beaches might be sketchy in the summer months when Spaniards are enjoying beach holidays. Expect to spend at least 33-40 days walking this Way.

The Via de La Plata + Sanabres

This was my chosen route. The Via de La Plata is 1000km (625 miles) and begins in Sevilla in southern Spain, follows the old roman roads northward to Zamora and then allows the pilgrim join the France or the Sanabres to Santiago. It is recommended to begin this Way in late April or early May and then follow spring northward. The route is well way marked and there are good accommodations throughout the spring, summer, and fall. It is a popular bike route as well as a walking route and we even connected with some horseback riders, too. Expect to spend at least 40-50 days walking this Way.

While many of the ways are popular to complete in one go, it is common, too, that pilgrims extend several short trips over a few seasons or years to complete their journeys. Beginning when they return in the town or city where they ended their previous trip.

WalkQuietly.org reserves the right to decline or suspend any member who violates our site policies. Privacy Policy.